26 JUNE – INTERNATIONAL DAY IN SUPPORT OF VICTIMS OF TORTURE 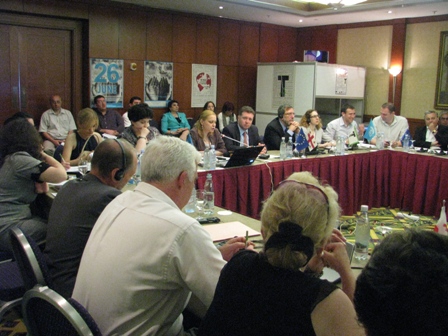 26 June is an UN International Day in Support of Victims of Torture!

On the 1-st of July, 2011, the 7 th Conference “World without Torture” was held at the Conference Hall “Ballroom” in Courtyard Marriott, 4 Freedom Square, Tbilisi •

Public Defender of Georgia and “Empathy”, the Rehabilitation Centre for Victims of Torture (RCT/EMPATHY, Georgia)

The Conference was held within the Program of the RCT/EMPATHY “Strengthening the System of Rehabilitation of Torture Victims in Georgia”, IRCT international project “Use of Forensic Evidences in the Fight against Torture” and Memorandum of Collaboration (Public Defender of Georgia and RCT/EMPATHY, Georgia)

Information support was provided by:

In Georgia, as well as in the most countries of world, fight against torture and ill – treatment is an actual issue. Speaking about the motto of the year, which reflects connections between torture and poverty, we mention: when about 20 percents of territories of Georgia are occupied, when about half a million of Georgian population have an experience of ethnic cleansing, when facts of ill – treatment and other issues related to the inadequate medical care, inhuman and degrading treatment in penal system are still actual for society, we consider that in this day it’s important to bring forward the actual issues and announce decisive struggle on impunity, on criminalization and effective investigation of torture, full and integrated multi-profile rehabilitation.

For this purpose we consider necessarily consolidation of civil society, governmental structures and international organizations for fight against torture. Accordingly, in the event were presented actual issues, reports, cases and were discussions about impunity, priorities of issues on torture criminalization and it’s solving means.

Opening Remarks was made by the Ambassador of European Union Delegation to Georgia Mr. Philip Dimitrov read more …..

Report of Public Defender on issue of problems of ill- treatment in Georgia and ways of improvements was presented at the Conference.
The report 2010 on multi faced rehabilitation of different kind of target groups were presented by the RCT/EMPATHY.

Many recommendations from the PRI, GYLA and RCT/EMPATHY were presented at the Conference that will be submitted for implementation to the responsible Governmental agencies.
Finally, about 100 persons from 66 different organizations: Intergovernmental, international, national State and non – State actors, mass media representatives were participated in this action. The priority issue was problems of impunity and criminalization of facts of torture and ill – treatment in Georgia.