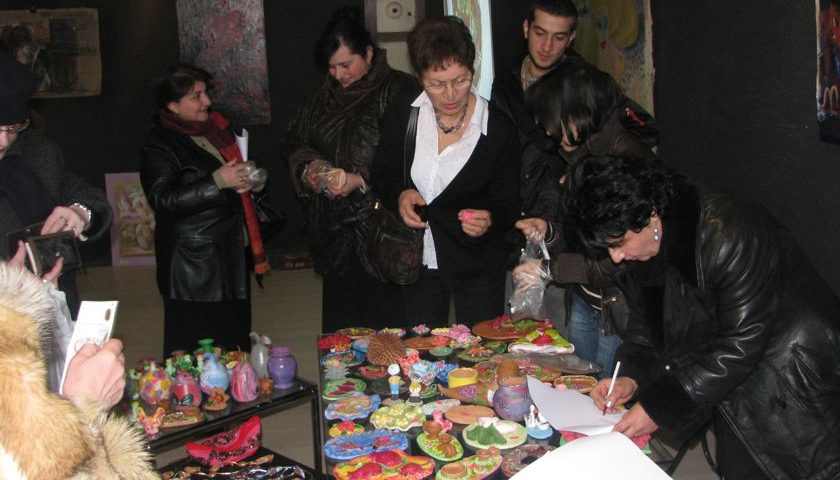 On December 20 of 2010 the Center for Rehabilitation of Victims of Torture “Empathy” in cooperation with Gallery “9” organized exhibition and sale of clay art works of beneficiaries of the center – IDPs, former prisoners and prisoner women and children (opening and press conference at 13:00; closing at 17:00). Within the framework of the above mentioned event the RCT/EMPATHY hold a special press conference dedicated to the issues of documentation and prevention of cases of torture and inhuman and degrading treatment in Georgia.

The above mentioned event conducted along with exhibition of art work of famous Georgian painters.

In the charity sales-exhibition participated famous Georgian painters and 10% of proceeds from sales of their art work shall be designated for provision of medical services to IDPs, who became victims of ethnic cleansing.

The event was hold in connection with International Day of Human Rights (December 10) and conducted within the framework of other events.

At the press conference was presented the cases of inhuman and degrading treatment, including the case of underage beneficiary of the center Empathy (read more see Case MM,); also was highlighted problems characteristic to penitentiary system of Georgia and standpoint of European Committee for Prevention of Torture (CPT), reflected in the report of the Committee.

Center Empathy made a special statement on the issue of restriction to which was subjected the project on “Strengthening of the System of Rehabilitation of Victims of Torture in Georgia” by actions of the Ministry of Correction and Legal Assistance of Georgia. During 2009-2010, the project was facing numerous problems, starting from July 22 of 2010 the project on medical and psycho-social rehabilitation in penitentiary facilities for women and juveniles, where previously were functioning three rehabilitation centers , established by center Empathy, – in women #5 facility, in the same facility juveniles prison and in juveniles colony, has practically ceased any operations.

The above referred recommendations are primarily focused on prevention of torture and healthcare within penitentiary system of Georgia, which is also reflected in the report of European Committee on Prevention of Torture, published in September of 2010, as well as documentation and effective investigation of cases of torture and inhuman treatment in accordance with international standards.

Proceeds from the sales of artwork produced within the framework of the project of the center Empathy on “Strengthening of the System of Rehabilitation of Victims of Torture” will be given to the authors – IDPs, former prisoners and other vulnerable categories.