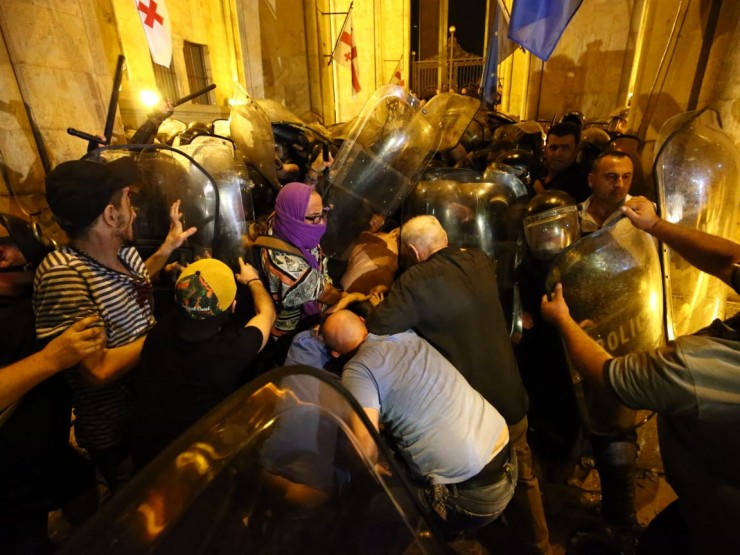 A Non-Government Organization, EMPATHY – Rehabilitation Centre for Victims of Torture, in the office of “EMPATHY”: 23 Kandelaki Street, 19/06/2020 at 11 AM, hold the briefing

Taking into account the situation due to COVID – 19, the briefing was held in an open space, following the rules of social distancing. Preliminary results of the study is also published on the website of centre, “EMPATHY”: www.empathy.ge

The punitive nature of the operation is also clear. This was detected in most civilian cases, damaging the upper area of the body, mostly the back, chest, face and upper extremities. Also inflicting injuries from 2-3 km distance of the place of dispersal of the rally and facts of ill-treatment of the people deprived of their liberty, were revealed. It is noteworthy the fact that mass-media representatives with identification evidence have intentional marks of injuries.

Serious legislative shortcomings were identified in the investigation standards, which is primary reflected in gross violations of victims’ rights in international standards of legal safeguards. Which includes not recognizing the victim, despite the fact of serious physical injuries as well as the inability to access case materials and expert findings.

In 100% the cases we examined, no forensic medical examination was performed, even by the standards that exist in the country which significantly differs from the international standards, in particular the principles of the Istanbul Protocol.

The victims did not have access to their own medical records, only some of them were given a medical Form N 100. The research showed that the original medical files were removed from the medical institutions by the prosecutor’s office, in the way that the copies of the documents did not remain in the relevant clinics. This complicates the conduct of the complex examination by us according to the international standards and violates the Georgian law on patient rights.

From the given situation, the facts of violation of the rights of the victim as a patient are presented. They are depicted in the cases of restriction of the access to the medical documentation, in one severe case, ill-treatment of a patient in a clinic by a legally unauthorized person was revealed, even with the threat of death. The victim was also restricted from contact with outsiders, mobile phone was confiscated on the grounds of harmful effect on health (radiation). According to him, even the prosecutor was refused by the unauthorized person – formally the hospital guard, to enquire the patient.

The Forms N 100 that we have obtained, namely, the medical records of the victims, do not describe the personal psycho-physical trauma which was the outcome from the government officials to the victims in accordance with the principles of “The Istanbul Protocol.” Tendencies to hide information are also presented, for example, in one of the cases we read, „The injury was received a few minutes before the hospitalization during a physical confrontation in the street”. By international standards the following questions must be answered: what happened, where it happened, under what circumstances, by whom the injury was inflicted and for what reason.

The information received from the hospitals and the statistics provided by the LEPL Emergency Coordination and Emergency Center do not correspond to each other, thus, it still remains unclear who, where and under what circumstances, what injuries were inflicted.

We also consider noteworthy to mention the illegal ways of spending expenses during the inpatient and further outpatient services for the injured persons, in particular, the investigated people state that the funds for medical services and/or medicines were paid by some unknown person. It is also noteworthy the participation of a private legal entity “Cartu Fund” and the legal grounds of this participation in the payments of medical services. It is significant that in such cases, investigative individuals refused to disclose the information because they feared that they would no longer receive proper medical care.

The results of this preliminary study are likely to indicate the circumstances that the state institutions: the Ministry of Health, the Ministry on Internal Affairs and the Prosecutor’s Office as well as non-governmental non-formal institutions and individuals with informal influence, acted at one against the victimized civilians in illegal and informal ways and in order not to make public the full information for the legal assessment of the events that took place in June 20/21 and not to conduct an effective investigation.

The mentioned study concerns the victims of the protest rally on June 20/21, as well as the legitimacy of the use of special police equipment.

Using the in-depth interview method, about 20 victims of the protest were interviewed, also 39 letters were sent to various state and medical institutions, requesting information. This research is still ongoing.