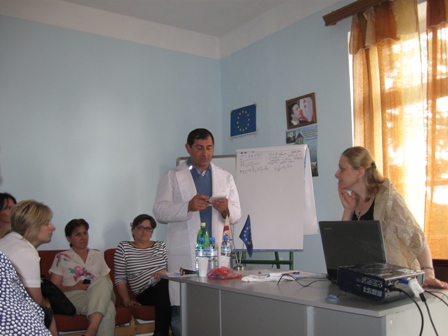 The training – Workshop: Physical and Mental/Psychological Consequences of Torture. Principles of Documentation and Reporting according to the Istanbul Protocol, Treatment and Rehabilitation for Doctors working with risk groups (Medical Experts, Psychiatrists etc) Was held in September 15 – 17, 2011 in Zugdidi in IDP Out Patient Clinic, 206 Gamsakhurdia Str, III Floor, .Zugdidi, Georgia. The Workshop was organized by the International Psycho – Rehabilitation Centre for Victims of Torture “EMPATHY”, Georgian Medical Association and Crisis Intervention Centre of Women’s association Nabakevi and Darcheli (Georgia/Abkhazia) with support of the IRCT materials in the framework of the Programme of the RCT/EMPATHY – Strengthening the System of Rehabilitation for Torture Victims in Georgia. This programme is funded by the European Union, UNVFVT, and IRCT.

During this training 31 health experts, among them 26 several specialties doctors and 5 psychologists and social workers were trained on issue of torture and other relevant topics of documentation and rehabilitation and consequently received special Certificates. Training was accredited in years 2006, 2008 in the MoH CEM/CPD programme and consequently doctors received 25 credit points. In this training – workshop together with local doctors the representatives from military region of Abkhazia were participate as well. In the end of mentioned above training the future plans of collaboration were identified.

Following trainer – experts, recourse persons from Tbilisi and local organizations were participated in this training:

All Trainers are certified specialists on Istanbul Protocol (Training of Trainers)